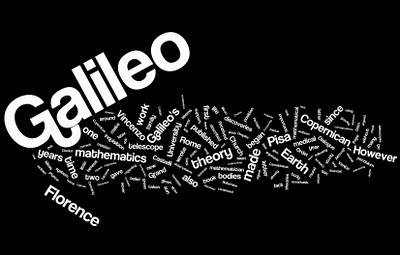 This wordle by the late Mandy Smith introduces an anthology of Galilean poetry dedicated to he who said E pur si muove or Eppur si muove (And yet it does move) and adapted the lunette for astronomy, and to those who cultivated his memory on October 22nd-24th 2009 through Galilean Nights, a cornerstone project of the International Year of Astronomy.

Valentin Grigore of the Romanian Society for Meteors and Astronomy-SARM organised a festival in the country's former capital Targoviste. The Galilean Nights / Nopti Galileene festival included a prologue begun on 21st October 2009, an Orionid meteor shower observational night in Priboiu (15 km from Targoviste), interviews for national and local mass-media, activities in the central square of Targoviste, tents with astronomical products, debates, projections of images, movies and planetarium programs, workshops, astroelectronic music, 3D images, remote observations, an astroart exhibition made by children, and especially telescopic observations of the Sun, Jupiter, the Moon and the Pleiades.

There was also a special live broadcast Us and the Sky / Noi si Cerul, on Columna TV, the Galilean Gala Astroshow at the Dambovita History Museum, composed of an astrophotography exhibition, astromovies, the International Galilean Poetry Evening and an astrofolk music recital which show also represented a gala of SARM's yearly Cosmopoetry Festival, founded in 1996.

My own contribution was THE GREAT GALILEO SPIN which I wrote at the behest of the organisers.

Pisa born man
whose father carries out experiments on strings
to support his musical theories.

Off you go to the Camaldolese Monastery
on the magnificent forested hillside
at Vallombrosa.

They want you to be a medicine man
but the mathematics of Euclid and Archimedes
mesmerise you more.

In "La Balancitta" you describe Archimedes' method
of finding the specific gravities of substances
using a balance.

You correspond with Clavius and Guidobaldo del Monte
concerning the theorems you have proved
on the centres of gravity of solids.

You lecture on the dimensions and location of hell
in Dante's Inferno
at the Academy in Florence.

The idea comes that one can test
theories about falling bodies
using an inclined plane
to slow down
the rate of
descent.

At the university of Padua
you teach Euclid's geometry
and geocentric astronomy
to medical students.

In three public lectures
you argue against Aristotle,
use parallax arguments to prove
that the New Star
can not be close to the Earth
and come out as a Copernican.

You grind and polish lenses
until you have an instrument
with a magnification of around eight or nine.

You demonstrate to the Venetian Senate
the commercial and military applications
of the telescope you call a perspicillum
for ships at sea
and sell the sole rights
for manufacture to the Senate.

In the book "Starry Messenger"
you claim to have seen
mountains on the Moon,
four small bodies orbiting Jupiter
and proved the Milky Way
is made up of tiny stars.

In a letter to the Grand Duchess
you vigorously attack the followers of Aristotle,
arguing strongly
for a non-literal interpretation
of Holy Scripture
when that would contradict
facts about the physical world
proved by mathematical science.

You quite clearly state
that the Copernican theory
is not just a mathematical calculating tool,
but a physical reality.

You hold that the Sun is located
at the centre of the revolutions
of the heavenly orbs
and does not change place,
and that the Earth rotates on itself
and moves around it.

You confirm this view
not only by refuting Ptolemy's and Aristotle's arguments,
but also by producing many for the other side,
especially some pertaining to physical effects
whose causes perhaps cannot be determined
in any other way,
and other astronomical discoveries
that clearly confute the Ptolemaic system
but agree admirably with this other position.

Found guilty of heresy
and condemned to lifelong imprisonment,
the sentence amounts to house arrest,
living first with the Archbishop of Siena,
then later returning home to Arcetri
though spending the rest of your life watched over
by officers from the Inquisition.

Your "Discourses"
are smuggled out of Italy,
and taken to Leyden in Holland
and published.

There you develop
ideas of the inclined plane
assuming that the speed acquired
by the same movable object
over different inclinations of the plane are equal
whenever the heights of those planes are equal.

You describe an experiment using a pendulum
to verify this property of inclined planes
and give a theorem on acceleration of bodies in free fall
and finally conclude
that the distance that a body moves from rest
under uniform acceleration
is proportional to the square of the time taken.

You die in early 1642,
your body concealed
and only placed in a fine tomb
in the church in 1737
by the civil authorities against
the wishes of many in the Church.

On 31st October 1992,
350 years after your death,
Pope John Paul II gives an address
on behalf of the Catholic Church
in which he admits
that errors had been made
by the theological advisors in your case.

He declares the Galileo case closed,
but he does not admit
they were wrong to convict
on a charge of heresy
because of the belief
that the Earth rotates round the sun.

O Galileo
how do you spin in your grave? 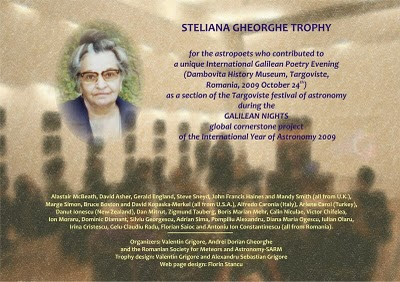 Read all the poems and see all the maginificent photos at Galilean poetry.
Posted by Gerald (SK14) on Thursday, December 24, 2009