This week I'm returning again to my archive of photographs from our journey to the Land of the Long White Cloud. 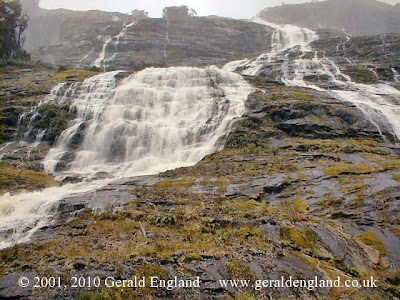 On Day 14 we travelled to Milford Sound with Ron Peacock a National Park Ranger. It started to rain as we left Te Aneau and steadily got worse. As we headed towards the Homer Tunnel we saw waterfalls appearing over what is normally just bare rock. Then as the rain got heavier and the surrounding rock-faces got steeper the waterfalls multiplied into an almost continuous curtain. 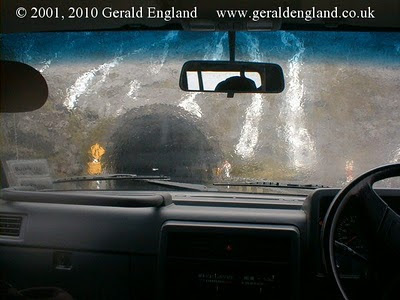 As Wikipedia informs us, the tunnel pierces the main divide of the Homer Saddle connecting the valley of the Eglinton and Hollyford Rivers to the east with that of the Cleddau to the west. The tunnel is straight, and was originally single-lane and gravel-surfaced. The tunnel walls remain unlined granite. The east portal end is at 945m elevation; the tunnel runs 1270m at approximately a 1:10 gradient down to the western portal. Construction of the tunnel began in 1935 but it wasn't completed and opened until 1954. 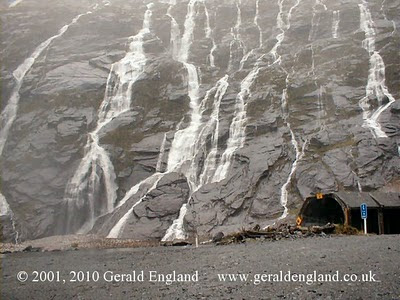 Here is the Eastern portal after we had passed through it on our return journey. Yes there it is down in the bottom right of the photograph. At the bottom of the mountainside are piles of dirty snow. 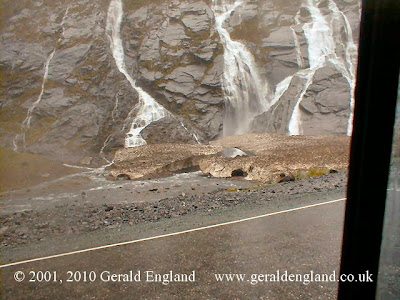