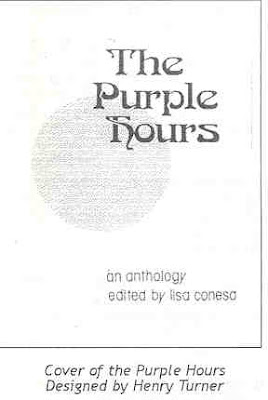 On my Collected Works site I've just posted The Experiment which was first published in The Purple Hours, an anthology edited by Lisa Conesa.

Steve Sneyd mentions this anthology in an article on the The Science Fiction Poetry of Robert Calver from the out of print Hilltop Press publication Gnawing Medusa's Flesh archived on the Aural Innovations website. 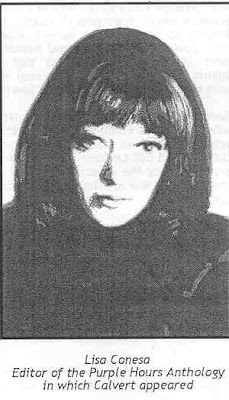 The one UK genre anthology of any real scope since 1969 was produced for a special purpose. Lisa Conesa, herself a poet and editor of the notable fanzine Zimri in the early and mid 70s, persuaded the organisers of the 1974 Tynecon convention to include a poetry reading - she called it a Poetry Soiree - in the program. Prior to the event, she approached a variety of writers, including SF professionals who wrote poetry, SF fans ditto, and little magazine poets, for work to include in an anthology to mark the soiree.

It also includes four poems by Robert Calvert - "The Clone's Poem", "The Gremlin", "The First Landing On Medusa", and "The Starfarer's Despatch". Calvert was also among those who read at the poetry soiree itself, along with Brian Aldiss, and South African-born poet Jeni Couzeyn, who wrote a series of poems inspired by Aldiss stories, although she did not appear in The Purple Hours.

My Collected Poetical Works site is intended to be a complete collection of my poetry and will eventually include all my published poems and a selection of unpublished work. I suspect it will take three years before we get to pieces written after the millennium!
Posted by Gerald (Ackworth born) on Sunday, August 08, 2010