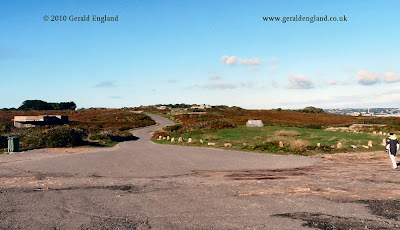 The headland known as Noirmont Point was acquired by the States of Jersey on behalf of the public in commeration of those men and women of Jersey who perished in the Second World War 1939-1945. 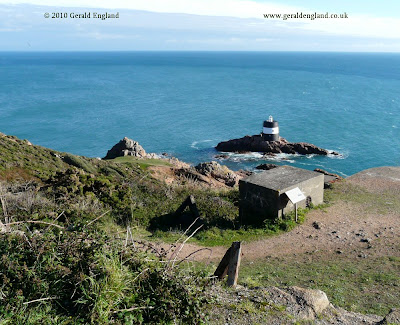 Noirmont Tower (also known as La Tour de Vinde) was built on an offshore rocky outcrop below the point in 1811. 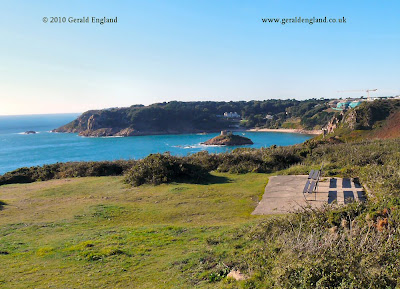 West is Portelet Bay in the middle of which stands Janvrin Tower. It was built as a defense against French attack during the 1800s, but it stands above the tomb of a sailor called Philip Janvrin. On returning to the island from a trip to Nantes in the year 1721, Janvrin and his crew were not allowed to land, for fear that they might be infected with the plague that was afflicting the people of that area of France. They where ordered to stay in quarantine on their ship in the nearby Belcroute Bay. It's not known whether the crew were actually suffering from the plague, but sadly poor Janvrin died and his widow was still not allowed to bring his body ashore. Permission was finally given for his body to be interred on 'Ile au Guerdain', so that he would be within sight of his St. Brelade home. 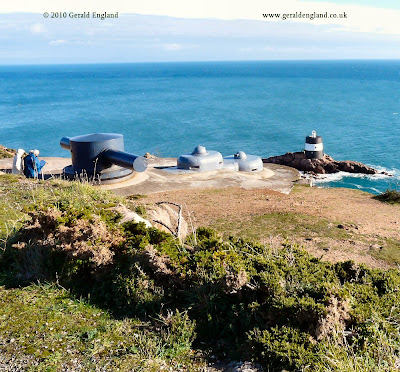 Here we see the top of an underground German Command Bunker which extends to a depth of 40ft on two floors. It was the Command Post (Leitstand) for the naval coastal artillery battery Lothringen located here.

One of four built to a similar design in the Channel Islands, the bunker was surmounted by a range-finder and two periscopes to determine the direction and speed of sea targets. Sealed up for safety reasons shortly after the war, the bunker escaped the scrap-drive of the early 1950s, with the result that it is the only example of its type in the Islands to retain the impressive 7 inch-thick armoured cupolas. The bunker has been restored to a very high standard and provides a unique insight into the sheer scale and thoroughness of German military engineering. 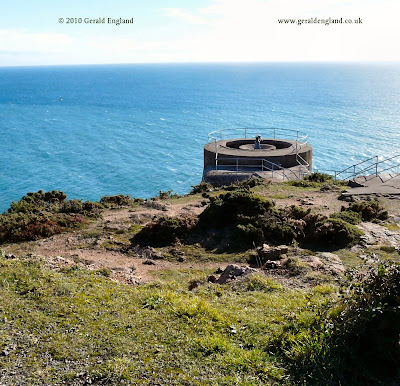 Also here is a Coastal Artillery Observation Tower. This massive structure, with its brooding clifftop presence over the Island's sea approaches is, for many, one of the most potent symbols of the Occupation. The tower was, in fact, known as a Marine Peilstand or naval direction-finding tower, and is one of three constructed in Jersey, out of a planned total of nine.

The design of these towers is unique to the Channel Islands, and may take its inspiration from the 18th Century Round Towers that ring the local coastline. The observation slits, set in 2 metres of concrete, provide an impressive setting for the distant sea views towards France. On top of the tower is a mounting for a 2cm Flak Oerlikon anti-aircraft gun.

Also worth a look is the website of the Channel Islands Occupation Society, a non-political, voluntary organisation, dedicated to the preservation and recordal of all aspects of the German Occupation of Jersey during the Second World War.