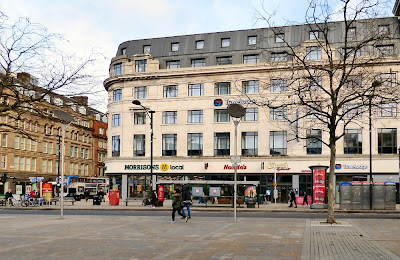 photograph © 2015, Gerald England.
The former Woolworths Manchester store on the corner of Piccadilly and Oldham Street was for a long time Noble's Amusements but is now a Travelodge with a Morrisons Local store, Nando's and Zizzi also occupying the ground floor. Buses for Ashton under Lyne leave from outside. 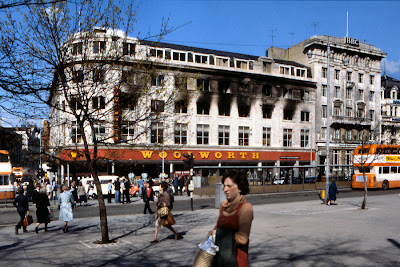 © Copyright David Dixon and licensed for reuse under this Creative Commons Licence.

The Woolworth's department store at the corner of Oldham Street and Piccadilly in Manchester, photographed a few days after the disastrous fire of 8th May 1979 which killed 10 people and left a further 47 needing hospital treatment.

The store comprised six floors along with two basement levels and at the time was said to be the largest Woolworth store in Europe. Crucially, the store had no sprinkler system fitted. It is believed that the fire was started by a damaged electrical cable that had furniture stacked in front of it.

The disaster led to a major shake-up in UK fire laws after it was revealed that polyurethane foam fillings in furniture at the store made the situation much worse. The foam would burn rapidly, producing large amounts of thick dense smoke which would have soon obscured the exit signs. This would have led to confusion and, together with the irritants in the smoke affecting people’s vision and causing breathing difficulties, would have hindered any escape. The changes in legislation are believed to have saved thousands of lives since.

At the time, on 8 May 1979, the Woolworth store blaze was the city's worst fire disaster since World War II.

Read the Fire Service report on the fire and the BBC News report.

A contribution to Our World Tuesday.
Posted by Gerald (SK14) on Tuesday, February 03, 2015