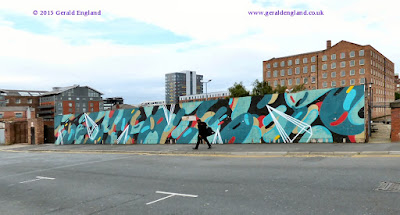 The mural on a 30 metre long, 3 metre high wall on Tariff Street was created by Parisian artist Florence Blanchard (also known as ema).

The piece, in blues and green, that reflect the waterside location, has a camouflage background with an abstract design on top. It was created over three days in 2013 using spray paints, emulsion and gold paint.

According to a report in Manchester's Finest, the artwork was expected be in place until 31 March 2014, but more than a year later it is still here.

See photographs of it under construction on the artist's blog.

Chrissy featured it in Monday Murals on Mancunian Wave in June 2014.