ABC Wednesday:S is for Surf Snowdonia 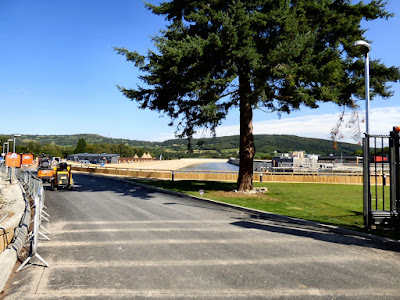 Surf Snowdonia, opened in August 2015, as a brand-new artificial wave facility at Dolgarrog in the Conwy Valley, North Wales. Privately funded, it cost £12m to build, on the site of a former aluminium factory – though it has been decontaminated since, and approved by Welsh environmental regulators. It is the first in the world. Surf Snowdonia uses WaveGarden technology, pioneered by a group of surfer-engineers in San Sebastián, Spain, and which is being rolled out globally from Spring 2016. The waves are created once a minute by a snow plough-like weight that moves underwater along a central pier.

The attraction is 300 metres (985ft) long and 110 metres (360ft) wide (around the size of six football pitches) containing six million gallons of water with three wave heights offering waves that are up to six feet high if you ride the whole way of 150 metres. The pool is filled with rainwater collected from Snowdonia reservoirs including Llyn Cowlyd. This water passes through the adjacent hydro-power station, originally built to power the former aluminium plant, before being pumped from the tail-race into the surfing pool.