ABC Wednesday: A is for Andy Pearce 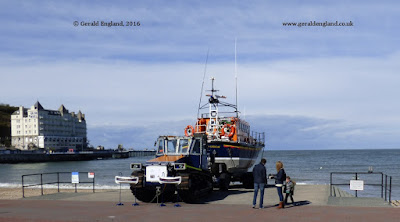 On the evening before the start of the annual Victorian Extravaganza Weekend, the lifeboat "Andy Pearce" was towed onto the slipway where it remained for the whole weekend. The Mersey class "Andy Pearce 12-006" arrived at Llandudno on 15th November, 1990 and after a week of intensive crew training, she was placed 'on station' on 23rd November. It is capable of operating at up to 17 knots (31 km/h) and can be launched from a carriage but can also lie afloat or be slipway launched when required. Its propellers are fully protected from damage when launching or in shallow water by partial tunnels and two bilge keels. Its low height can be further reduced by collapsing its mast and aerials which then allows it to be stored in a boathouse. A sealed cabin gives it a self-righting ability. Power comes from two Caterpillar 285hp turbo-charged engines. It carries 1,110 litres (290 US gal) of fuel to give it a range of 240 nautical miles (440 km). It has a crew of six and can carry a X Boat inflatable which it can deploy at sea. Its survivor compartment can carry 43 people, but more than 21 prevents self-righting should the boat capsize. 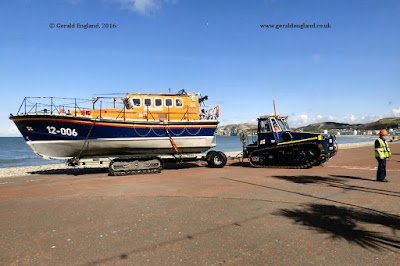 The All-weather Lifeboat 'Andy Pearce' cost approximately £455,000.00 to build and was provided out of a legacy from Mr Andrew Pearce, plus other gifts and legacies. Andy Pearce successfully carried out her first rescue on 17th April 1991 when she was launched in early darkness to rescue two men in difficulties off the Rhos-on-Sea breakwater. The two men, in a 25' converted ships lifeboat, had been in trouble at the boat's mooring because of a strong north westerly wind (more than 40 mph) and a four foot swell. Both men were taken abroad the lifeboat unharmed and landed safely at Deganwy. 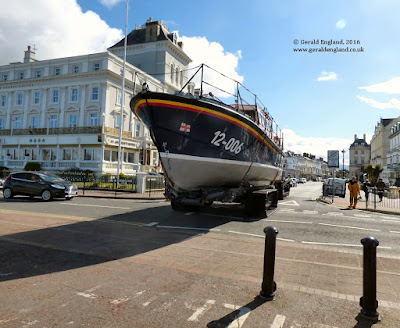 After use the lifeboat is towed back through town to the lifeboat station. Llandudno Lifeboat Station is the only lifeboat station in the UK to have its boathouse located in the middle of town. Whereas most lifeboat stations are situated next to the sea for obvious reasons, Llandudno Lifeboat Station is situated in Lloyd Street, almost equidistant from both of Llandudno's shores. The reason for this unique situation goes back to 1861 when the boathouse was positioned so that the boat could be towed equally quickly to either North Shore or West Shore. 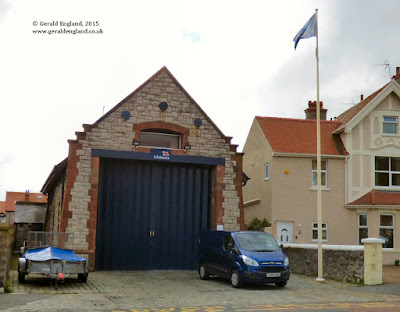 The current boathouse was constructed in 1903. A new lifeboat station is currently being built at Craig-y-Don where a larger boat can be accomodated.

A contribution to ABC Wednesday.