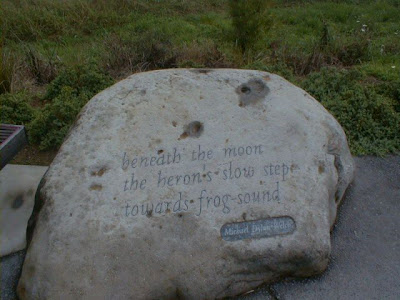 beneath the moon
the heron's slow step
towards frog sound

The Katikati Haiku Pathway was the brainchild of Catherine Mair. It was created as part of a millennium project that sought to reclaim wasteland around the Uretara Stream which seperated the centre of this Western Bay of Plenty District town in New Zealand from the Highfields area. 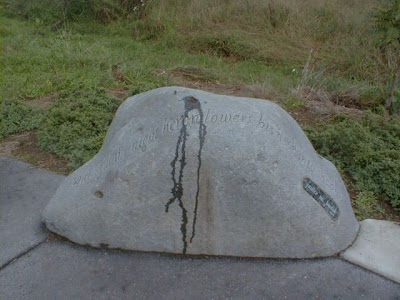 watchful the night heron lowers his neck into shadow

I visited Catherine in 2001 and she took me on guided tour. She told me about how she came to choose the haiku used, and about the way the town co-operated, despite certain opposition, with its creation. The boulders had weathered well. After rain, water gathers in small pools on some of the lettering. We poked our fingers into one such pool. I wrote

splash of water
trickles down the stone
finds its own pathway

after visiting the above boulder. 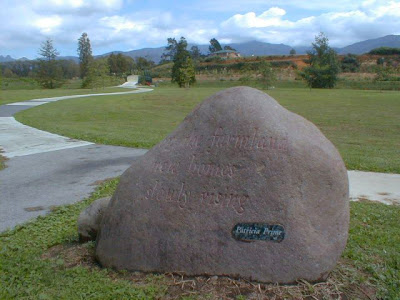 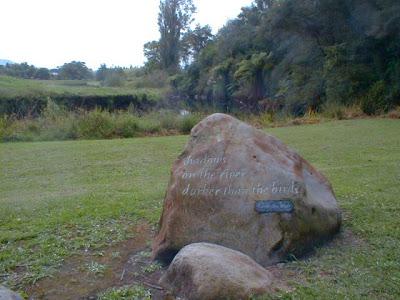 shadows
on the river
darker than the birds 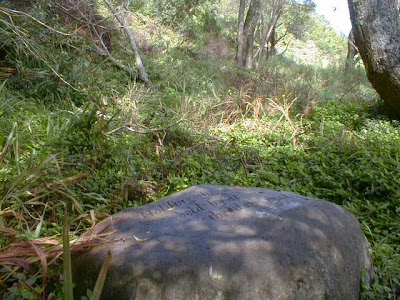 Catherine tells me in a recent email that since my visit there has been massive development. 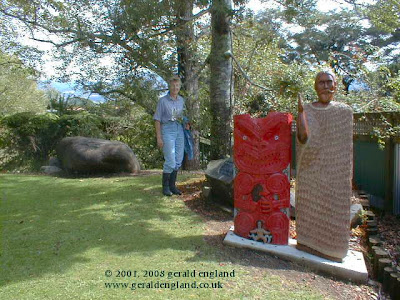 Catherine Mair standing by the exit from the Haiku Path near two carved pieces created by a Maori carver representing one of the three marae in the district. They have since been removed for restoration. 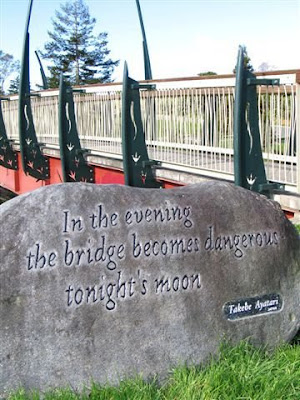 in the evening
the bridge becomes dangerous
tonight's moon

Secretary of the Pathway Focus Committee, Sandra Simpson tells me

We now have 30 engraved haiku boulders, which we believe to be the largest such grouping in English anywhere and the largest outside Japan. The poems are by 26 poets from New Zealand, Australia, Canada, the US, Japan, Poland and England (Alan Summers).

The Haiku Pathway guidebook was updated and reprinted to coincide with the dedication of the 3 new boulders last winter (our winter May/June).

The next 2 big projects to bring to fruition are a major new entry sign, the design of which is in keeping with the pathway, and information boards for visitors, including items such as a map of all the boulders and some background to haiku.

One of the new boulders is 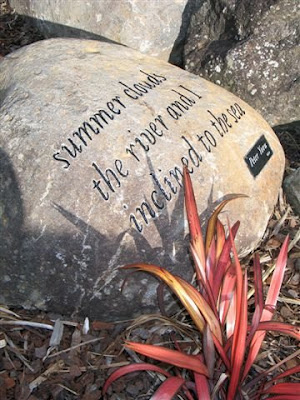 summer clouds
the river and I
inclined to the sea