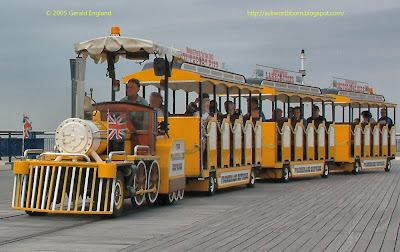 I took this photo of a train on Southport Pier in 2005.

A monochrome version has just appeared in a new book by Peter Kealey "The Charmer Ron Muddle". The biography tells how during WWII Ron Muddle worked for the Air Ministry and designed the fuel tank for the Spitfire. After the war he set up a coachbuilding firm in Dover and won the contract to supply railway coaches for the Romney, Hythe and Dymchurch Railway. He was then contracted to supply the train and coaches for the railway on Southport Pier. He spent three months in Southport as project manager and whilst there toured the local golf courses. His major sporting interest however was horse-racing and he went on to become the owner of Lingfield and Wolverhampton racecourses.

More information about Peter Kealey's book can be found on Amazon.co.uk. Between 2005 and 2008 the old trains on Southport pier were replaced by these modern all-weather sleek beasts.

A contribution to Monday Mellow Yellows and Blue Monday.