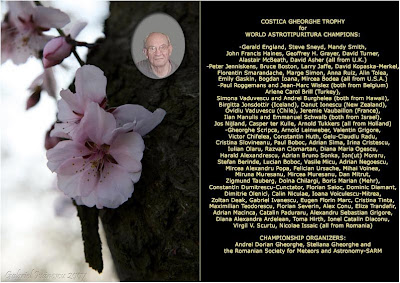 The "tipuritura" (from "tipat" in Romanian = scream) is the shortest poetic form in Romania, created in the northern region of Maramures to be screamed at folkloric parties. In the 1930s, inspired by the tragicomic spirit of the tipuritura, Stan Ioan Patras founded the Merry Cemetery in Sapanta (also in the Maramures zone) by realizing artistic works and writing short humorous poems on its tombs.

After 1995, Andrei Dorian Gheorghe adapted astronomically this poetic species, published an essay, Tipuritura - A Kind Of Romanian Haiku, in The Art of Haiku 2000 (edited in U.K. by Gerald England and New Hope International), and performed a few own astrotipurituras atThe World Astrotipuritura Championship had the following rulesThe finalists of the first World Astrotipuritura Championship were invited by the organizers generally after their achievements in astropoetry (astronomical poetry) in the last years or represent the most important people who have marked SARM's Cosmopoetry Festival history.

My contribution was:
Mars passes through the Great Bear
Is there anybody there?

Our Eight Hand Gang leader contributed:
The Moon hangs pale above the trees -
Is it really ripe, green cheese?

I wonder if there's life on Mars?
Do they drive around in cars?

Missed! The asteroid whizzed past;
Unfortunately, not the last.