Shadow Sunday: The Wizard of Christchurch 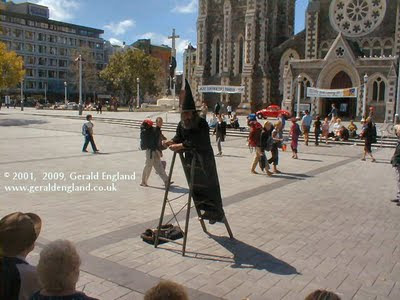 This week my contribution to Shadow Shot Sunday dates back to 2001 when we joined the crowds in Cathedral Square, Christchurch, New Zealand to listen to the Wizard.

I wander off down to Cathedral Square to listen to The Wizard. Since 1974 he has been speaking in the Square and can be heard most weekdays from 1 to 2 p.m., November to March. Although the City Council were first opposed to him, he is now regarded almost as an institution. Described by some as a misogynist, today he expounds his theory that the cause of all the wars of this world is "women's need to go shopping!" He is in fact a congenial, accessible gentleman and not a woman-hater at all. After his oration, several of the crowd of three-dozen or so listeners, talk to him. He was born in the UK and I told him I was from Manchester. A young mother who'd been talking to him about the New Zealand education system, asks me where in Manchester I'm from. When I tell her I'm from Hyde, she reveals that she's originally from Dukinfield [the next town] — o what a small world this is! The Wizard tells us that he's heading off to Australia in the afternoon to avoid the New Zealand Census.

I heard later that the Wizard had retired but the Wikipedia entry for him indicates that he still active.