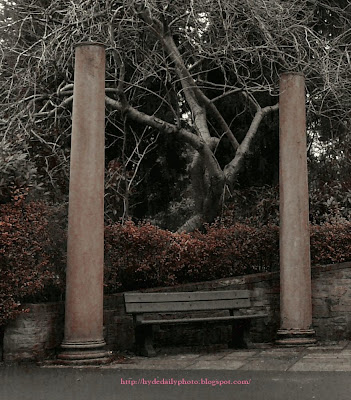 This bench is in Hyde Park, Hyde, Cheshire.

It is one of two benches in an area used to provide a setting for a memorial stone "Lest We Forget". The pillars are two of the four which are the only remains of Newton Lodge, the former home of the Ashton family who gave the park to the people of Hyde in 1902.

The setting was created when the park was refurbished in 2000. The stone had previously lain in one of the gardens.

The full setting can be seen on Hyde Daily Photo and the memorial stone on Hyde DP Xtra.

My favourite benches discovered recently include Rune's in Grimstad, Christchurch Photo Diary's by the Avon river, Leatherdyke's in Queen's Park and Julie's in Sydney.
Posted by Gerald (SK14) on Friday, December 11, 2009