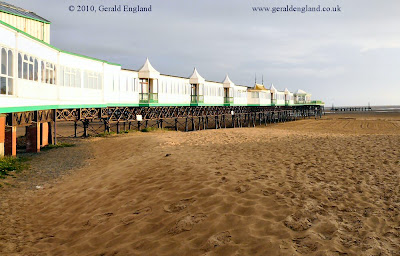 Some more photographs now from our recent visit to St Anne's on the Sea.

A conventional promenade pier constructed of iron columns with lattice girder work, St Anne's Pier was a relatively modest affair built to a length of 914ft (277m) at a cost of £18,000. Designed by A Mawson and commissioned by the Land and Building Company Ltd, St Anne's Pier was opened by Lord Stanley on June 15th 1885. In 1904 further, much more ornate, work was carried out with the construction of a fabulous 1000 seat 'Moorish' pavilion as well as various kiosks along the pier neck. This was complimented by a red brick mock-Tudor entrance building, complete with imitation wooden beams and gables, at the shoreward end. The whole complex was finally completed in 1910 with the construction at the pier-head of the 'Floral Hall', which provided facilities for concerts, opera's and vaudeville acts.

So let us take a walk on the sand. 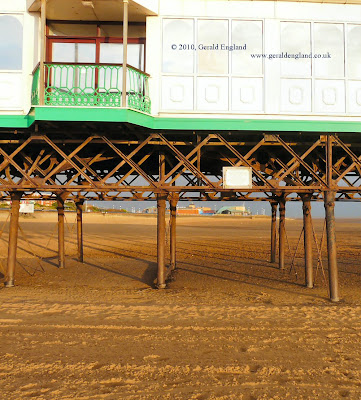 Through the pier we can see the lifeboat station near Arnold's bench.

An amusement arcade was added to the entrance buildings in 1954 and in 1960 a restaurant was added along with the re-planking of the main deck. 1962 saw St Anne's Pier purchased by the Amalgamated Investment & Property Company for the sum of £240,000 and renovation of large areas of the pier commenced. The work included the entrance buildings, the Floral Hall, a landing Jetty and a children's area that had been damaged by fire in 1959. 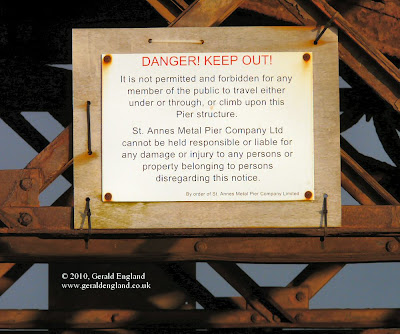 We had better heed the warning and walk around the end of the pier - the tide is out and the sand not too soft. 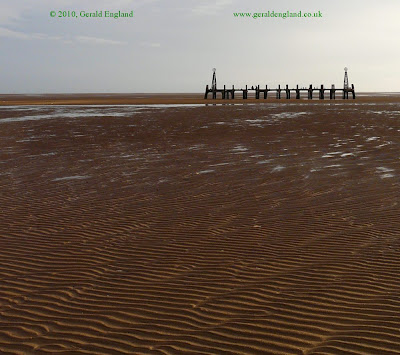 In 1974 a serious fire completely destroyed the recently refurbished 'Moorish' Pavilion and a building of considerable architectural merit was sadly lost. The fire also damaged the Floral Hall, jetty and pier substructure but an application to demolish the damaged seaward section was refused by Flyde District Council in 1975. The pier owners subsequently went into liquidation. 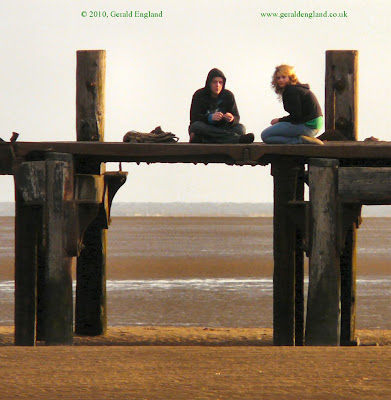 Successive owners carried out further restoration works but the bulk of the seaward end structure was finally destroyed in another blaze in July 1982. The Floral Hall was burnt down and St Anne's Pier seaward end was so badly damaged that this time it had to be demolished, reducing the pier's length to a mere 600ft (182m). Further refurbishment was carried out on the shoreward end buildings during the 1990s

Thus remains this little stump from which we are being watched. 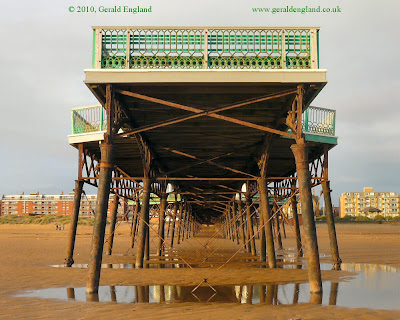 Looking back now under the pier.

As I turned towards the South side of the pier to head back to shore I cast a long shadow which can be seen on Shadow Shot Sunday.

The information on the pier is from The Heritage Trail website.