Reflections in the Irwell 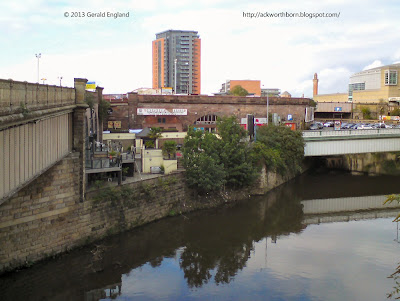 The River Irwell rises on the Rossendale hills north of Bacup and flows south for 39 miles before joining the River Mersey west of Manchester.

During the Industrial Revolution the river became severely polluted by industrial waste but in the second half of the 20th century, a number of initiatives were implemented to improve its water quality, restock it with fish and create a diverse environment for wildlife. Consequently, stretches of the river flowing through Manchester and Salford have attracted large-scale investment in business and residential developments such as Salford Quays, and other parts of the river have become nationally important wildlife havens.

This stretch is below Manchester Cathedral and there used to be moorings underneath this viewpoint.

The bridge on the left is Cathedral Approach. Formerly it carried the railway into Manchester Exchange Station but now leads only to the NCP car park.

On the right is Chapel Street bridge carrying the A6041. Behind it is the railway bridge leading out of Victoria Station.

A contribution to Weekend Reflections
as well as Scenic Weekends
and also Sunday Bridges at San Francisco Bay Daily Photo.