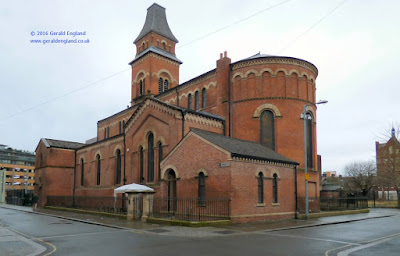 St Peter's Church was built in 1859 to designs by Isaac Holden, the founder chairman of the Manchester Society of Architects, who was able to design in a number of continental styles, and the building was consecrated in 1860. Once built the church could seat up to 1,336 people. It was consecrated at 3 pm on Saturday 14th January 1860. A Sunday school opened in 1863.

In the late 1950s, the congregation was joined by that of the nearby St James' Church and briefly became known colloquially as St Peter's and Little Jimmies'. St. Peter's desperately needed repairs but, with a declining congregation, struggled to ever raise enough money for them. The size of the congregation soon became unsustainable again, however, and the church closed shortly after its centenary in 1960.

Twenty-five years of mixed use followed, from University theatre prop storage to a knitting factory. The building was Grade II listed in 1989 as part of the designation of the Ancoats Conservation Area but in the early 1990s it was abandoned, purchased by a developer with long-term plans to convert it to residential use. 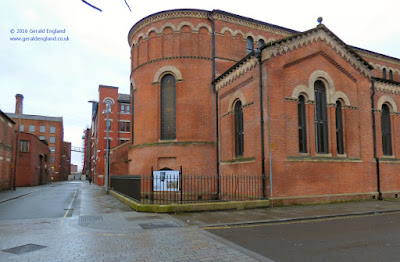 The building suffered vandalism and St Peter's was left to rot, a symbol of the wider neglect and dereliction of Ancoats. In 1998 initial work began to restore St. Peter's. By 2003 a major grant had been confirmed from the Heritage Lottery Fund as well as others from English Heritage, the Architectural Heritage Fund and the Northwest Regional Development Agency.

St Peter's Church is now a permanent rehearsal centre for the Hallé ensembles and a resource for the whole community. This restoration is Phase One of a longer term project to build an extension on the adjoining site to provide workshop, archive and other facilities. 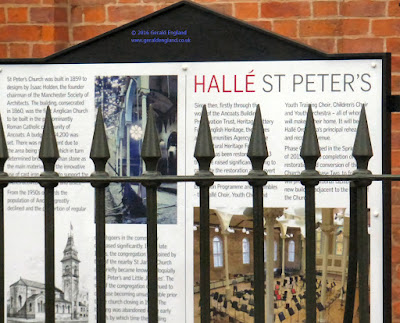 I didn't explore the vicinity much further - see my post Kitten at New Islington to learn the reason why.

A contribution to Inspired Sundays.
Posted by Gerald (SK14) on Sunday, January 24, 2016