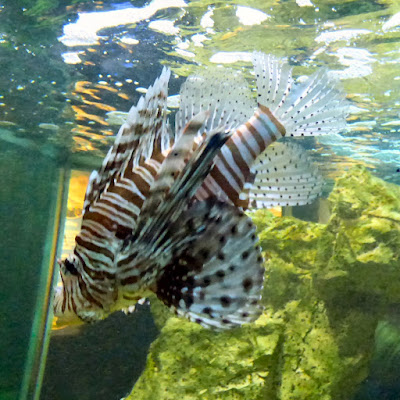 Lionfish (Pterois volitans) are covered in orange, brown, black and white stripes and have large feather-like spines at the ends of their fins which hide their venom tipped dorsal spines.

Found in the Indian and west Pacific oceans they feed on small fish, shrimps and crabs. 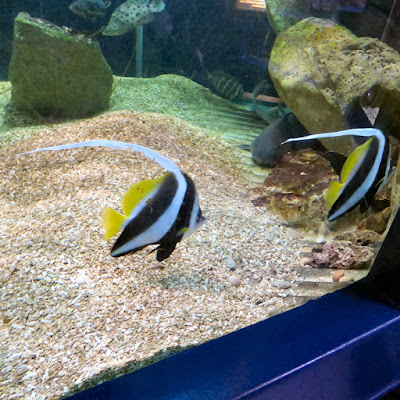 Longfin Bannerfish (Heniochus acuminatus) is a type of butterflyfish and can grow up to 25cm long. Its body is covered in white and black bands and it has bright yellow fins and tail.

Found in the tropical waters of the Indo Pacific and the Coasts of Africa, it feeds on zooplankton, small krill and other invertebrates and is known for eating the parasites off larger sea creatures. 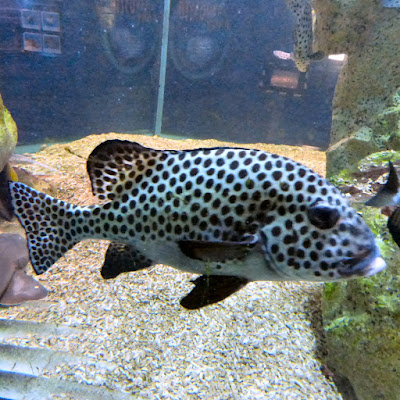 Spotted Grunt (Plectorhincus chaetodonoides) is white with small brown spots along its body. They move to mimic a poisonous flat worm as a predatory response.

I discovered these last September on a visit to Rhyl SeaQuarium.

A contribution to Saturday Critters and Camera Critters.
Posted by Gerald (SK14) on Saturday, April 09, 2016