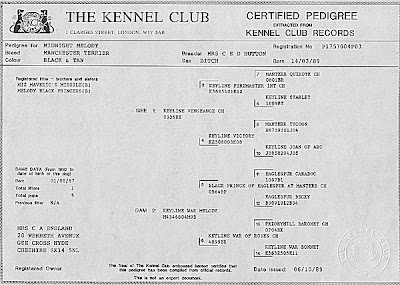 A Manchester Terrier, her Pedigree included a number of breed champions.

She was some twelve weeks or so old when we acquired her. She was raised outside the Yorkshire seaside spa of Scarborough. As the journey to collect her took us across the Pennines, we decided to call her Penny. For her kennel name we chose Melody as that name linked her to her mother and Midnight on account of her dark coat. 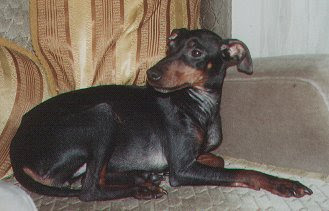 She was a very nervous dog, prone to snapping at strangers and yapping at the slightest noise. At first she did not like car travel and was frequently sick. For Easter 1991, we went up to Stranraer for a holiday, staying at a farmhouse B&B. We took her with us. Penny had to live for the whole week in the back of our Ford Sierra Estate. It transformed her into a car-loving dog. 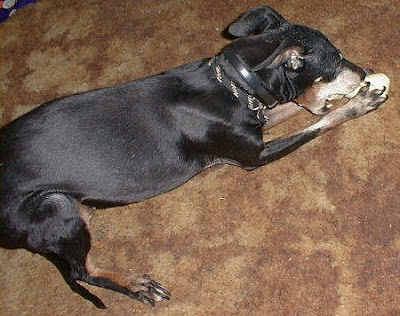 After that she began to accompany me most days on my rounds as an insurance agent in Oldham. She was given the nickname "my alternative car alarm"

We made three attempts to breed from Penny. The first was with a dog from Penistone, West Yorkshire, but she failed to take. We then tried her with a dog from Belper, Derbyshire. After the second mating with this dog she appeared to take. She made herself a little nest in one corner and on the night the pups were due I slept downstairs with her. It turned out, when we took her to the vets, that she'd had an ectopic pregnancy. After that we didn't try again. 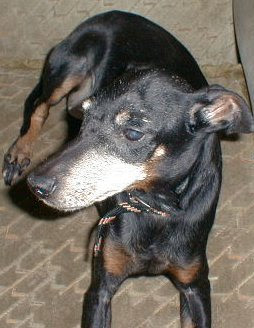 She developed an abscess when she was about eight or nine years old and had to have fourteen teeth taken out. After that, a lot of her hair gradually began to go grey. Early in 2002 she developed a tumour on her belly. Although still quite active and alert, she began to sleep longer in her bed at night. When our son, Craig, came home from college for his Easter break, we explained things to him and he said goodbye to her for the last time. On 18th April 2002 the vet put her to sleep.

Your photo-story about Penny impressed me very much.

(in memory of Penny)

This account of Penny is reproduced here today as a response to the pet theme at One Single Impression.

I may not be responding to comments over the next few days as tomorrow (Monday) I shall be attending my sister's funeral.
Posted by Gerald (Ackworth born) on Sunday, June 08, 2008