ABC Wednesday:
O is for the Orion 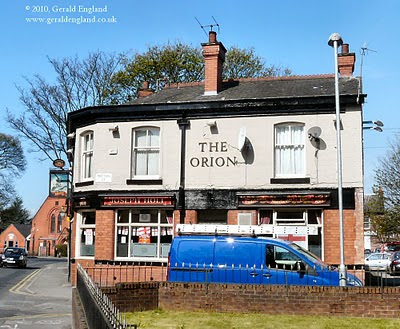 After I'd taken some photographs the other week near Christie Hospital, I walked towards Withington looking for further photo opportunites and came across The Orion. 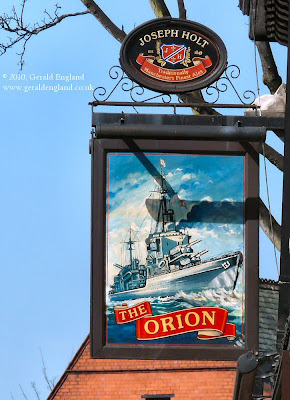 From its sign it would appear to have been named after a ship.

If the uboat.net site is to be believed, "HMS Orion" was a light cruiser of the Leander class, launched in 1932 and scrapped in 1949.

According to another website it was part of the British West Indies squadron based in Kingston, Jamaica.

In trying to find out what the connection might be with this South Manchester pub, all I managed to come across was a posting on the Curious Fox website where someone asks

Any information or pictures sought on the ORION INN on Burton Road, Withington, a public house that is still standing today. The inn is still standing today, and my 2x Gt grandfather John Norbury was landlord there in the 1870s/1880s along with his father George Norbury. John was apparently also the parish clerk, and served in the navy on the HMS Orion, which is presumably how the inn first got its name. Would be interested in contact with anyone with a connection to the pub past and present, and especially of any old photos of the Orion Inn around the turn of the century (1900) or earlier. Would also like to talk to anyone who has a Norbury connection in Withington during this period as John and his wife Martha had a number of children.

which rather begs the question - was the pub still called the Orion in the 1870s?

Edit: Since first posting this I've been sent this link to the full history of HMS Orion on the Naval History website.