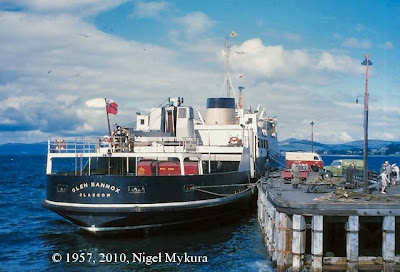 This is the Glen Sannox Clyde steamer docked at Fairlie pier south of Largs. The wooden pier is no longer there though its remains can be seen on satellite photos.

The Glen Sannox was the first ro-ro (roll-on, roll-off), ferry of the Caledonian Steam Packet Company and this was her first season on the Fairlie/Arran run. She also went to Millport on Cumbrae and lots of other Clyde routes. Before the Glen Sannox cars were run on to the ferry using two dodgy planks of wood. Trains ran from both Kilmarnock and Glasgow to connect up with each sailing of the Arran ferry. The number of passengers using this link often required two trains for each sailing on each route. The services from Glasgow also frequently split with one section going to Fairlie Pier Station and the other one to Largs.

I don't remember the size of the pier as the last time I was there was 1963, but I am guessing that this photo was taken from another ferry approaching or leaving the pier. All of the people on the pier are staring at something to the south of the pier, presumably the steamer the photographer was on. There appears to be propeller wash from the second ferry in the right foreground.

There is now a modern jetty just to the north of this position which is not extant. It is also interesting that despite it being high summer, two of the four men on the pier are wearing flat caps and long overcoats. The small green van on the pier appears to have the word SIMPLEX on the side. Already loaded onto the Glen Sannox (or just about to come off) is a red railway freight box car with British Railways in yellow lettering on the side. There is a set of chain slings attached to the box-car indicating trans-shipment by crane at some point. The only recognizable cargo is a load of gas canisters on the trailer on the pier. 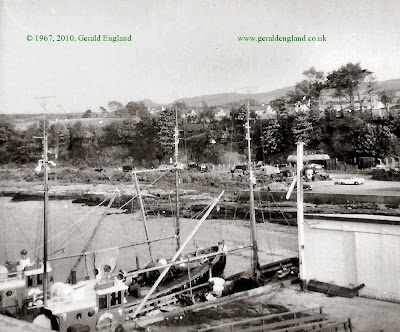 I travelled on the ferry between Fairlie and Brodick on Arran in 1967. On my page Fairlie not Arran I describe how I discovered that I'd taken a photograph of Fairlie rather than Brodick. The page carries that picture and other shots of the village by later photographers.

I thought this other of my 1967 photos (that had "Brodick" scribbled in pencil on the back) was taken from the ferry looking across the pier at Fairlie and away from the village.

I've just discovered that this one is actually of Brodick Pier. A fuel depot has been built where the cars are parked. 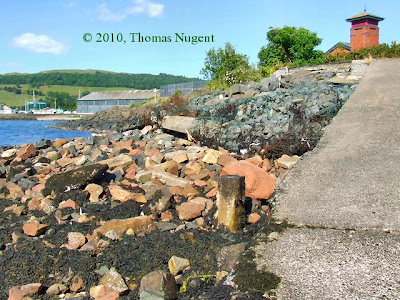 Only one truncated wooden pile was visible at this fairly low state of the tide. There are more piles under the water, but these were not visible today (19th June 2010).

The building in the background is a sewage pumping station which was built in the 1990s in the style of a Victorian railway shed in order to blend-in with the surroundings. 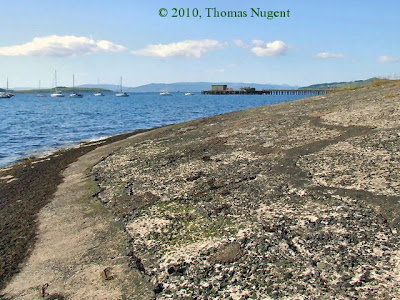 The old MOD jetty is visible in the background. 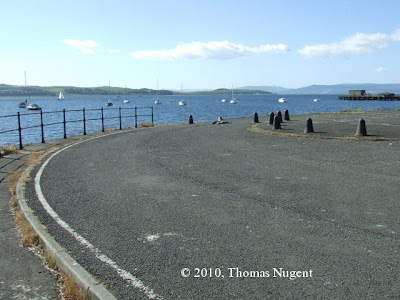 Virtually all trace of the pier is gone. It was located at the end of the railings.

Some reminiscences of Fairlie can be found on my earlier post Fairlie 1967.

More information on the village can be found on the Fairlie Parish Church website.

The photographs by Nigel Mykura and Thomas Nugent are licensed for reuse under this Creative Commons Licence.
Posted by Gerald (Ackworth born) on Wednesday, August 25, 2010